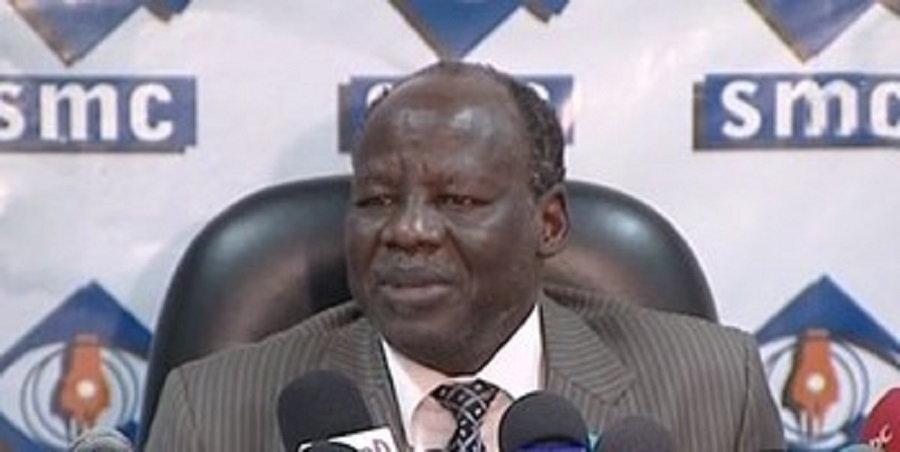 Leader of the National Democratic Movement (NDM) and Secretary-General of South Sudan Opposition Alliance (SSOA) Dr. Lam Akol Ajawin is asking for the appointment of his nominee as governor of Jonglei state (Photo credit: via Radio Tamazuj)

JUBA – Opposition leader Dr. Lam Akol Ajawin has appealed to President Salva Kiir to support his nominee for Jonglei state governor, days after welcoming a Kiir-Machar consensus that ended a four-month-old deadlock on states allocation between the parties to the revitalized peace agreement.

There are rumors that President Salva Kiir is working to appoint the state governors this week, although a senior opposition has said today that the parties were in a deadlock over when that action should be taken.

Kiir and Machar met at the statehouse J1 on Wednesday last week and reached a consensus on how to resolve the deadlock on the states allocation which has been on for a duration of four months, and which has been blamed by peace sponsors for the surge in ethnic violence at local levels.

The Kiir-Machar consensus provided for the allocation of six states to the SPLM-IG. These are the states of Warrap, Unity, Northern Bahr el Ghazal, Eastern Equatoria, Lakes, and Central Equatoria.

The SPLM-IO was given three states which are Western Equatoria, Western Bahr el Ghazal, and oil-rich Upper Nile state. The South Sudan Opposition Alliance was given the Jonglei state which it initially rejected, but accept after pressure mounted on them from the two principals of the agreement. 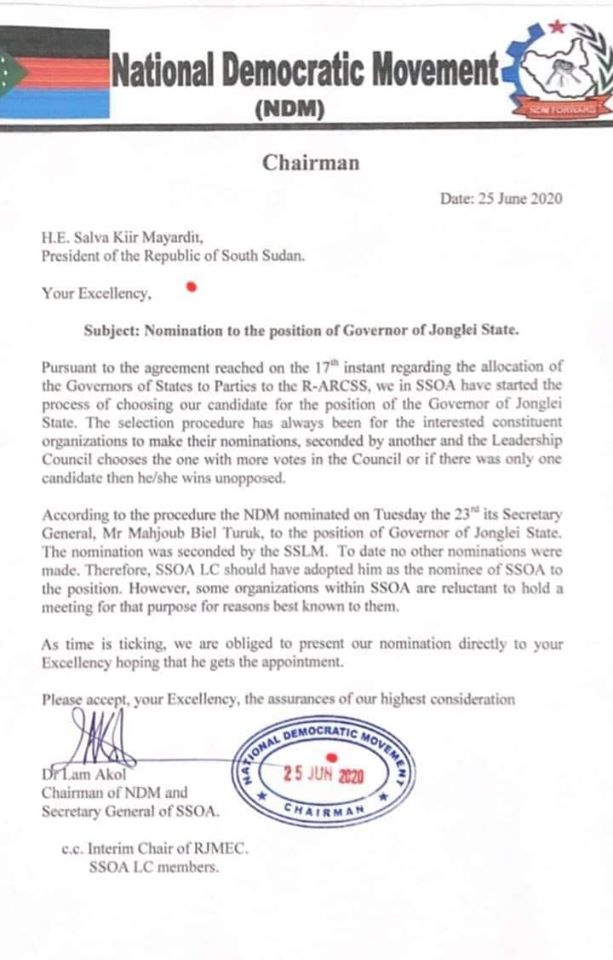 Following the announcement of the deal by South Sudan’s presidential minister Nhial Deng Nhial, Dr. Lam’s group along with another party within the Alliance welcomed the decision by the two men to allocate to them Jonglei state and immediately nominated its secretary-general for the position of the Jonglei state governor.

In a letter on Thursday, Dr. Lam asked Kiir’s support on the matter and appoint his nominee as Jonglei state governor because – according to him – it is the last chance for the group to serve as part of its contribution in the implementation of the revitalized peace agreement.

“Pursuant to the agreement reached on the 17th instant regarding the allocation of the Governors of States to Parties to the R-ARCSS, we in SSOA have started the process of choosing our candidate for the position of the Governor of Jonglei State,” Dr. Lam said in the letter dated June 25, and addressed to Kiir.

“The selection procedure [for Jonglei state governor] has always been for the interested constituent organizations to make their nominations, seconded by another and the Leadership Council chooses the one with more votes in the Council or if there was only one candidate then he/she wins unopposed,” he added.

He said his group has nominated its Secretary-General, Mr. Mahjuob Biel Turuk, to the position of Jonglei state governor adding that the “nomination was seconded by the SSLM.”

“To date, no other nominations were made. Therefore, SSOA LC should have adopted him as the nominee of SSOA to the position. However, some organizations within SSOA are reluctant to hold a meeting for that purpose for reasons best known to them.

“As time is ticking, we are obliged to present our nomination [for Jonglei state governor] directly to your Excellency hoping that he gets the appointment.”