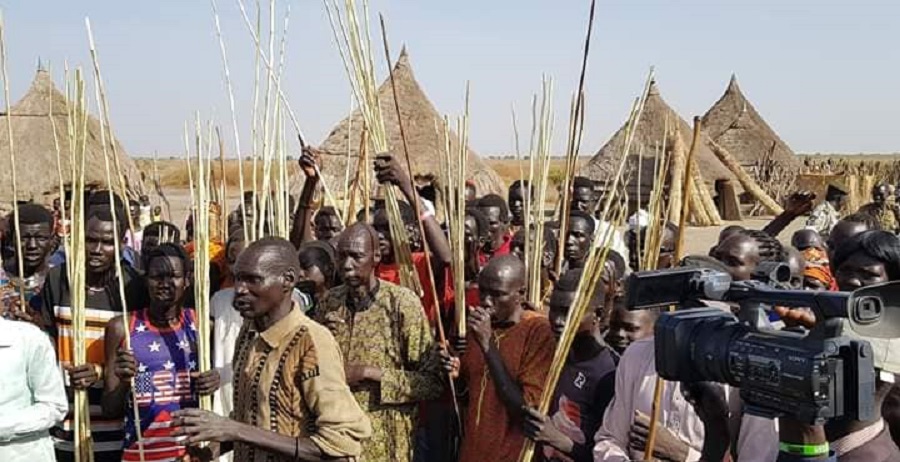 Residents of Unity state’s capital Bentiu celebrating in the streets to welcome the reappointment of Dr. Joseph Nguen Manytuil as governor [Photo via Facebook]

BENTIU –Residents of South Sudan’s Unity state capital Bentiu have taken to the streets this morning to welcome the re-appointment of Dr. Joseph Nguen Manytuil Wijang as governor of the oil-rich state.

President Salva Kiir Mayardit on Monday defied calls to replace Manytuil and reappointed the medical doctor to the position which he held since mid-2013, following the removal of now vice-president Taban Deng Gai in a controversial move.

Speaking to Sudans Post this morning, Dr. Samaan Chutyier, a senior aide to Manytuil, said spirits were high in the capital Bentiu and that residents have taken to streets to welcome the decision by Kiir to reappoint Manytuil.

Separately, residents have confirmed that they are on the streets of Bentiu expressing happiness to President Salva Kiir for the reappointment of the man they describe as servant of the people.

“We are really happy with President Salva Kiir Mayardit. Reappointing a servant of the people who is Dr. Nguen Manytuil is a great action and we welcome the move,” one resident who identified himself as Gatluak told Sudans Post from Bentiu on phone.

Another resident said he welcomes the move by Kiir to reappoint “our governor who has done what it takes to reunited the people of Unity state who have been disunited under the dictatorship of Taban Deng Gai.”