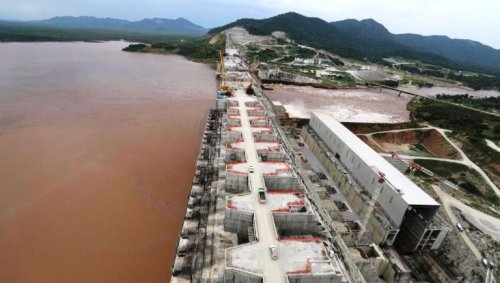 KHARTOUM – Sudan has urged the United Nations Security Council to encourage all parties with a stake in the Grand Ethiopian Renaissance Dam (GERD) to “refrain from any unilateral measures” that could affect regional and international peace and security.

In a letter to the Security Council on Tuesday quoted by the Cairo-based al-Ahram, Khartoum’s Foreign Minister Asma Abdalla explained Sudan’s position on the ongoing developments related to the dam, including an initiative adopted by Sudan to resume negotiations on the disputed dam with Egypt and Ethiopia.

Sudan asked the Security Council to support its efforts to resume talks in good faith to reach a comprehensive agreement between all parties.

The letter stressed Khartoum’s principled decision on “negotiating in good faith,” to which it has committed during negotiations given its belief in the importance of a solid foundation for cooperation between the three countries.

The letter listed some of the potential positive impacts of the mega-dam on Sudan, including the regulation of the flow of the Blue Nile, which would reduce annual floods during rainy seasons and enable the country to better manage its irrigation system.

The dam will also increase the power generation from existing hydropower plants, and will increase the navigation depth of the Blue Nile, the letter added.

On the other hand, listing the negative impacts of the dam, Sudan said that the GERD would completely change the flow of the Blue Nile by flattening its hydrograph.

“With this gigantic size, the GERD risks causing significant negative impacts to Sudan if not properly designed, constructed, filled and operated,” reads the letter.

“These impacts range from threatening the lives and safety of millions of Sudanese citizens living directly downstream from the GERD, to the operational safety of the Sudanese dams, to the flood-plain agricultural system of the country, and the socioeconomic and environmental impacts along the Blue Nile downstream from the main Nile River, all the way up to the border with Egypt,” the letter added.

“For the positive impacts to be realised and for the negative impacts to be mitigated there has to be an agreement in place with Ethiopia on how to fill and operate the GERD, otherwise the GERD stands to cause substantial risk to Sudan,” Khartoum said.

It also asks the UN council to support Sudan’s efforts and call upon all the parties to resume immediate negotiations in good faith with “the objective of resolving the pending issues and concluding a final comprehensive agreement.”

Sudan’s government also affirmed its commitment to the rules of international law stipulated in the UN’s Convention on the Law of Non-Navigational Uses of International Watercourses.

The rules mainly cover the equitable and reasonable use of watercourses and the obligation not to cause significant harm to other watercourses, and the settlement of disputes by peaceful means.

Khartoum’s letter a comes few weeks after Egypt, Ethiopia and Sudan agreed to resume technical discussions on the mega-dam.

The tripartite negotiations reached a deadlock in February after Ethiopia skipped a final round of talks in Washington, leading to a diplomatic war of words between Cairo and Addis Ababa.

On 1 May, Egypt sent a memo to the Security Council blaming Ethiopia for trying to establish a deal without taking the interests of downstream countries, Egypt and Sudan, into consideration.

Egypt rejected, along with Sudan, an Ethiopian proposal put forth last month amid the ongoing discord, wherein Addis Ababa proposed a “partial agreement” that would only cover the first stage of the filling.

Addis Ababa told the Security Council in May in a letter sent in response to the Egyptian memo that it “does not have a legal obligation to seek the approval of Egypt to fill the dam.”

Egypt has said it is ready for a revival of talks but stressed the importance of “serious and constructive” talks between the three countries’ irrigation ministers to contribute to a fair, balanced and comprehensive agreement that would preserve Egypt’s water rights and the interests of both Sudan and Ethiopia.

Some 85 percent of the Nile water that reaches Egypt flows from the Ethiopian highlands, mainly from the Blue Nile.