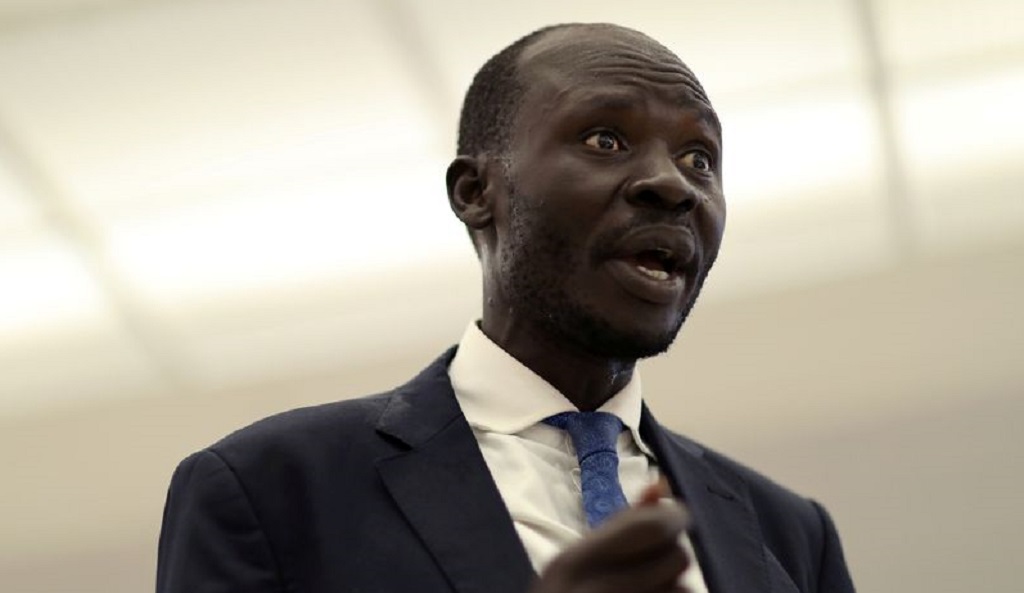 South Sudanese economist Peter Biar Ajak speaks to Reuters as he arrives at Dulles International Airport in Virginia, after fleeing Kenya with his family to the U.S., July 23, 2020. [Photo by REUTERS]

WASHINGTON – South Sudan’s exiled activist and economists Peter Biar Ajak has issued a statement welcoming an announcement by President Salva Kiir’s office that it will hold a press conference to respond to allegations made by Biar against the government.

The office of the president yesterday announced that it would conduct a press conference at the statehouse J1 on Friday. In response, Peter Biar welcomed the decision but challenged the president and his security chief to prove that they didn’t plan to kill him in Kenya.

Belo is the full statement issued by Peter Biar on Wednesday!

“I welcome the Office of the President of South Sudan’s announcement it now wants transparency and accountability with regards to how it has treated me as a political prisoner and later after it forced me into exile.  But holding a private press conference will not achieve that goal.  If the Government truly believes these allegations are false, then there are three simple steps it must follow:

First, the Government should make this a publicly-available press conference and announce immediately it will be broadcasted live, online.  That way their allegations can be viewed firsthand around the world so their credibility can be assessed in real-time.

Second, it should announce at the press conference that it will immediately allow unrestricted access to the International Committee of the Red Cross to visit the Blue House and all NSS prisons.  In 2019, the ICRC reported it visited some 5,700 detainees in South Sudan general prisons.  But having been a political prisoner in the Blue House over that time, I know for a fact it was never allowed into the Blue House.

The Government cannot be allowed to simply assert that NSS prisons are free from widespread extrajudicial killings, torture, and sexual abuse of prisoners when there is direct evidence available of such crimes from former prisoners.  If the Government has nothing to fear, it will throw open the gates of the Blue House, allow the ICRC in, and allow it to conduct unrestricted and unmonitored interviews with the prisoners detained there.

Finally, the Government claims it will be disputing my announcement I had to flee Nairobi to avoid a death squad sent on orders of President Kiir.  But talk is meaningless.  If the Government was really so confident that my claim is false, then President Kiir and Gen. Kuc wouldn’t be safely instructing the Government to hold a private press conference in Juba, they would have already sued the Wall Street Journal in New York for libel.

I issue this challenge to President Kiir: Come prove to the world in a U.S. Federal Court you didn’t send a death squad to abduct or murder me in Nairobi.  If you win – which you will not because the facts are clear – I will apologize to you publicly.  But if you lose, then you must resign, as South Sudan surely deserves a President who does not order assassinations of his political opponents.  Either way, it has been nine years since you were appointed President and you must face South Sudan’s voters by December 2021.  The people of South Sudan deserve a President they elected and one who will have democratic legitimacy and bring peace and national reconciliation to South Sudan.”